As scientists, we like to solve puzzles about the natural world. But as engineers, we are drawn to problems with great societal and economic importance. The Tang Lab combines those two roles by studying the fundamental physics and chemistry of systems and materials for electrochemical energy storage and conversion.

Electrochemical systems are one of the most promising routes for scalable electricity storage. Long-term storage is the Achilles’ heel of intermittent renewables like wind and solar because electrical energy must be converted to thermal, mechanical, or chemical energy. No current technology can accomplish this task at scale. The diversity of atomic arrangements in molecules makes chemical energy by far the most versatile. More importantly, the energy stored in chemical bonds dwarfs thermal or mechanical methods. 10 kJ can be stored mechanically, by pumping 100 gallons of water ten feet uphill (minus conversion efficiency), or chemically, by charging a single AA battery.

As one might imagine, electrochemical systems have some pretty complicated physics. There are lots of densely packed molecules moving around, many of them charged. There are at least two (and usually more) reactions at interfaces, and often reactions in solution as well. Our group thrives on this complexity because we excel at mechanistic analyses. What this means is that we think very carefully about a complicated system with many moving parts, distill the confusion down to a straightforward question, then come up with a clever method to answer the question. Often, that method involves comparing a physics-based model to some experimental measurements of current and voltage. Here are a few examples of the kinds of questions we ask (and answer):

Sometimes, our answer to the fundamental question leads us to propose a new material or device that can solve a problem. We work with materials scientists, polymer chemists and other collaborators to test these ideas. We can and do make our own materials, but have generally found that working with other people yields better results and is more fun. If you think you have a problem that we could help with, send Maureen an email.

Congratulations to Dr. Luis Rebollar for successfully defending his thesis! 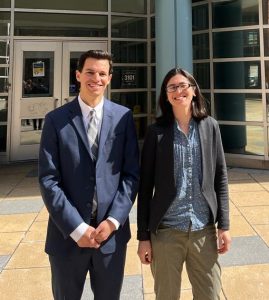 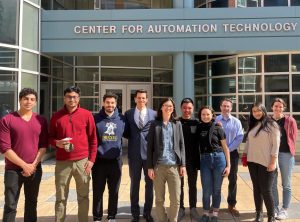 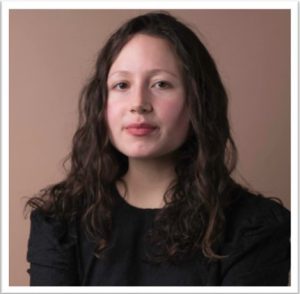 Ram’s paper, “Characterization of a Sulfonated Poly(Ionic Liquid) Block Copolymer as an Ionomer for Proton Exchange Membrane Fuel Cells using Rotating Disk Electrode”, is published in the Journal of The Electrochemical Society! doi.org/10.1149/1945-7111/ac4375

This month we said good bye to our post doc, Harsha. We wish him the best at his new job at Evonik! 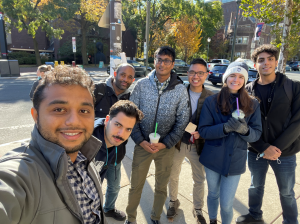 Our paper, “Gd-Ni-Sb-SnO2 electrocatalysts for active and selective ozone production”, is published in the AIChE Journal! Nice work James, Tana, and Harsha! doi.org/10.1002/aic.17486